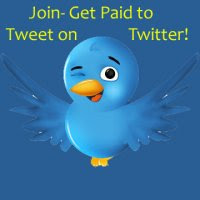 Since it will be hard and time consuming for advertisers to go look for individuals who want to get paid for tweeting, get paid to tweet websites were born to do the job for them. Get paid to tweet websites act as the middle man between you and the tweet sponsors. You sign up with them for free and they will match you with their advertiser’s paid tweets which you can get paid for tweeting them.

Sponsored tweets pay differently depending on what the advertiser want you to tweet about and how important that product or service they are paying you to tweet on twitter is. Also, the amount of tweeter followers you have and how responsive they are, plays a big factor in how much you can expect to make tweeting sponsored tweets. But, for most tweets you can expect to get paid anywhere from $0.10 to up to $5 or more per tweet.

Here are a few websites where you can get paid to tweet:

SponsoredTweets.com
Perhaps the biggest and most famous get paid to tweet site, having celebrities such as Diddy and Kendra Wilkinson as tweeter and Microsoft and Volvo as advertisers.

TwitPub.com
TwitPub is the marketplace made for Twitter so users can buy and sell premium tweets.

Twivert.com
Not only you get paid to tweet, you also earn money by referring your friends to Twivert.

If you have tested any of the  paid to tweet programs and it is not listed here, you can share it here by posting it through the comment box or by sending it to the admin through admin@justnaira.com

N: B ==> Getting paid to tweet won’t make you a lot of money, unless you are a big time celebrity. But it is an easy way to earn some extra cash online. Since tweeting is not hard and most of us do it every day, I will implore you to adopt this system.

Previous Post: How To Make Money With Your Blog in Simple Steps
Next Post: Legit Internet / Online Businesses For Smart Nigerians
About The Author