Ever since the Google Glass Explorer program was opened to the public earlier this year, the Internet has been buzzing with speculation about the technology’s potential in almost every industry, from gaming to healthcare to law enforcement.

As with any new technology, of course, there are some potential drawbacks; for one thing, Glass doesn’t come cheap, while other concerns focus on the privacy issues that come with the ability to take photos and record unobtrusively in public spaces.

Still, it’s hard to ignore the many uses for Google Glass, particularly in education spaces.

One of its most valuable contributions to education could be the eye-level video-capture function, because although videos of lessons and classroom activities certainly aren’t new, Glass allows users to capture footage from their own perspective, which opens up a whole new slew of opportunities.

For instance, teachers can create first person how-to guides and share them online all in one fell swoop, making it easier to flip lessons and create interactive learning materials for distance programs.

Students can also benefit from this feature by taking turns using Glass to document their own learning experiences. This allows teachers to see the classroom and their own teaching through the eyes of the students, which gives them a better idea of what captures a student’s attention and also enables them to identify and fix simple problems.

Field trips can also be recorded from both a teacher and student perspective. Such videos can then be played back to students at a later date, enabling a much more in-depth discussion of the sights and sounds than would have been possible at the time.

Of course, the possibilities don’t end there, and the following infographic by Open Colleges lines up 30 other examples of how Google Glass might facilitate learning and teaching in the not so distant future.

Click on the image below for a larger version. 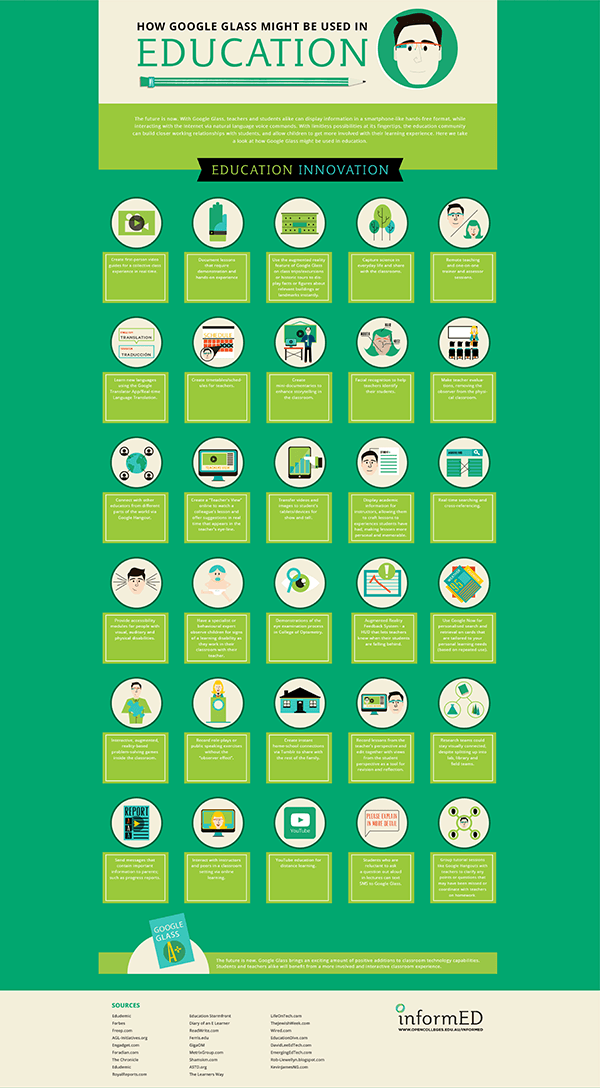 
Previous Post: Your Websites Doesn't Need all the Trendy Design Out There
Next Post: Twitter Is Suspending Accounts of Users Sharing Beheading Video
About The Author

Andrianes Pinantoan is InformED's editor and part of the marketing team behind Open Colleges. When not working, he can be found reading about two of his favourite subjects: education and psychology. You can find him on Google+ or @andreispsyched.