April fool’s Day is a one day you can be a total ass to people without any consequence of whatsoever. There are no other days in the year that you’re allowed to legally play silly pranks and jokes on your co-workers, friends & family with a built-in excuse. Today, I want to share some pranks you can play on people. You can also add your own April’s Fool Day pranks, jokes and whatever in the comments. 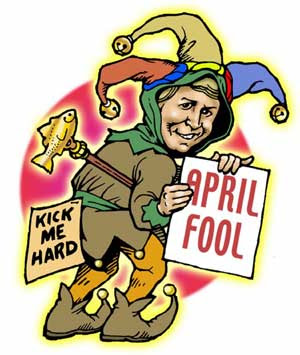 Use a pin to poke tiny holes in a straw, then offer it to your victim. They’ll suck and suck but just mainly get air.

Put a notice on your victim’s car that it’s for sale. List a very low, yet still realistic price. Include the victim’s phone number.

Tell your victim that their shoelace is untied. When they look down, laugh and say “Made ya look!”.

Get to the office before your coworkers (or do it the night before if you hate getting up early). Pick a coworker that you hate and take every single freaking article off of their desk and wrap it like a gift. Wait for the fun

Has your victim been working on an important document on their computer? Carefully hide the document in a safe place, then create a fake document with the same name. Fill the document with gobbledy-gook or a funny story. At the bottom put “April Fool’s!”

Superglue some coins/notes to the sidewalk or any spot that has a lot of people walking around. Make sure it’s an appropriate place, then watch people break fingernails to get the coins/notes.

Pour vegetable oil on the exhaust of someone’s car so it will smoke when started up.

Hide an alarm clock in someone’s bedroom and set it for 3:00 a.m.

Remove the shower head and place a Lifesavers candy in it, then put the head back on.

Remove the shower head and place a chicken bouillon cube in it, then put the head back on.

Rearrange somebody’s drawers or file cabinets in a different order.

Tape magnets to the bottom of a cup, put it on the roof of your car and drive around.

Put an ad in the paper for a garage sale at someone’s house beginning at 6 a.m.

Buy some underwear, write a co-worker’s name in them, then leave them on the floor of the office bathroom.

Get a gang of people to help you pull this prank on your victim. Throughout April Fool’s day, when each person is around the victim, they should pretend to smell something stinky. Ask the victim if they smell it too. After several people in a row do this (separately), the victim will become paranoid that is is THEM that is stinking.

Go on Facebook and change your birthday to April 1st. Wait for all your friends to wish you a Happy Birthday, then laugh hysterically!

If the victim uses Microsoft Word, go into the victim’s computer and change the auto-correct feature so it misspells common words. Just open Word, choose “AutoCorrect Options” from the Tools menu, and have it replace common words like “the” and “and” with wacky words like “eggplant” or “Uranus.” Be creative.

Confuse your victim by changing all the icons on the computer desktop. Just rename all the icons to whatever you want. Then change the icon pictures: right click on each icon, choose “Properties” then the Shortcut tab, then “change icon.”

This is a one of the oldest April Fool’s Day pranks in the world! Take the top sheet off the victim’s bed, and tuck the bottom end under the top end of the mattress. Pull it down and then fold it back up so that the top end is where it would be if the bed was made normally. Replace the pillow, blanket, etc., and make up the bed like it was before. When the victim gets into bed, they’ll be surprised when they can’t slide their feet all the way down to the bottom of the bed!

Simple: put salt on the victim’s toothbrush. Then stand by to watch the surprised look on their face.

This is the most classic and simple prank ever. Balance a small disposable cup of water on the top of a partially open door. Then wait for the splash!

Tape a dollar bill to the end of the fishing line on a fishing pole. Then hide behind a bush and wait for your victim to come along. As soon as they reach for the money, reel in the line a few inches. Keep reeling until they realize they’re being had.

If you have an office phone system that allows conference calling, you can prank two people at once. Call the first victim’s extension, then very quickly call the second victim and push the conference button. Now both people will think the other person called them and will begin arguing over who called whom!

Coordinate everyone in your office to play a practical joke on your boss. Throughout the day, each person should email, voicemail or leave a note for the boss, saying they need extended time off. Each person should give a different explanation: pregnancy, sick family member, etc.

This prank will only work in classrooms that have old-fashioned chalkboards and chalk erasers. Tuck a piece of chalk into the pads of the eraser. When the teacher tries to erase the board, he/she will get a streaky surprise!

If you look at a lot of electronic calculators, they are held together by screws and can be opened up. (Don’t try this unless you are sure it won’t damage the calculator!) For a great prank, open the calculator, and swap the ‘+’ and ‘x’ keys. Put it back together, and watch your victim get frustrated when they try to do simple math! For an added effect, swap the ‘-‘ and ‘/’ keys as well.

If you know two people who have identical phones or iPods, and they keep them in different color cases, then you can prank them both at the same time! Just switch the phones inside the cases, giving each person back the correct phone case, but the wrong phone!

This prank can be pulled on two victims who have bedroom doors directly across the hall from each other (dorms usually work well for this). Use a rope to tie both door knobs to each other, with just enough slack to allow one door to open a crack. Then knock loudly on both doors at the same time. The victims will end up in a tug of war trying to get out.

Know someone who is a sound sleeper? Then you can draw a mustache on their face while they sleep! Just use an eyebrow pencil or other make-up. No markers! They’re too hard to remove!!

Put a note on your victim’s car that says “Sorry about the dent. Call me so we can swap insurance information.” Include a fake name and phone number. Be sure to hide nearby so you can watch them search in vain for the “dent.”