Recently while I was browsing through some website online, I found an interesting and inspiring piece I love so much. We can all apply the lesson in this piece to our business, personal life, education and everything we engage in. Today I wish to share the success story of a British inventor named James Dyson. 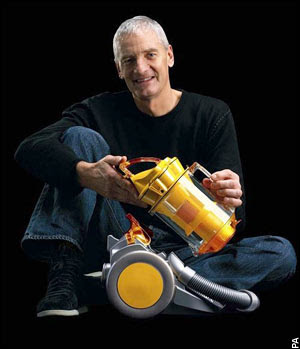 James Dyson (born 2 May 1947) is a British industrial designer and founder of the Dyson Company, and an inventor who has developed products that have achieved sales of over $6 billion worldwide.

Among his earlier inventions are flat bottomed boats called Sea Trucks and ballbarrows (wheelbarrows with a giant ball instead of wheels). More recently public restroom users have enjoyed Dyson’s Air Blade hand dryer. I find the story behind Dyson’s greatest commercial success, the Dual Cyclone bagless vacuum cleaner, to be the most interesting.

James used the knowledge gained designing an industrial cyclone tower in 1978 to build a vacuum cleaner that would require no bag at all. The incredible part of the story is that this took Dyson 5 years and 5,127 (five thousand one hundred and twenty seven) prototypes to get it right.

James could have given up at 5,126 prototypes or could have allowed discouragement to divert his attention, but he kept going.

If you had to advise James Dyson early at his 1000th or 3,000th prototype, what would you have told him? Would you have advised him to continue, or give up?

At 5,127 prototypes the Dyson Dual Cyclone became the fastest-selling vacuum cleaner ever made in the UK, outselling products from companies that had rejected his idea.

Unless you have reached your destination of financial independence, you must keep going, keep re-inventing yourself until you succeed and remember failure is another way of learning, it is inevitable, and you must never run away from it but instead embrace it.