On April 19, 1995 at 9:02am, a 5000-pound bomb was hidden inside a Ryder truck and it blew up the Alfred P. Murray Federal Office Building. This incidence caused massive damage to the building and it claimed 168 people lives, 19 of whom were children. The U.S. Government mounted a massive hunt on those who were responsible for what became generally known as Oklahoma City Bombing. The people responsible for these were home-grown terrorists, Timothy McVeigh and Terry Nichols. The Oklahoma City Bombing was the worst terrorist attack on U.S. until the World Trade center attack that happened on the 11th of September 2001. 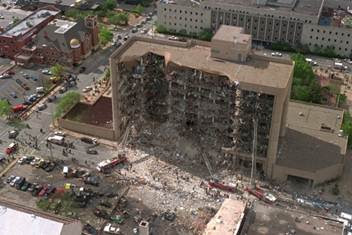 Why McVeigh Planted the Bomb?

The main reason why Mc Veigh bombed Alfred P. Murray Federal Office Building was because on the 19 of April 1993, there was a standoff between the FBI and the Branch Davidian cult at the Davidian compound in Waco, Texas and this standoff ended in a fiery tragedy, so the FBI tried to stop the standoff by releasing gas in the complex and this gassing caused the entire compound to went up in fire. The fire incidence claimed 75 followers lives including many young children.

Since the fire incidence claimed so many lives, many people blamed the U.S. government for the disaster and one of them was Timothy Mc Veigh. Mc Veigh decided to take revenge on the federal government especially on the FBI and the Bureau of Alcohol, Tobacco, and Firearms (ATF). In downtown Oklahoma City, because the Alfred P. Murrah Federal Building held numerous federal agency offices, including those of the ATF.

What a Memorable Day

On April 19 every year after the incidence of the Murrah Federal Building Bombing, 168 seconds of silence are observed at 9:02am in memory of the lives that were lost in the misfortune incidence.

A memorial was built on the location to remember the tragedy of Oklahoma City Bombing. The memorial is symbolic of many things to different people. It is a day to remember loved ones lost. To those who survived the incidence, it is a proof of life and to others, it serves as a teacher for the future generations that has no understanding what went on in the past. The connotation each symbol holds is equally important and we must continue to remember.

Get More  Books and Videos on Oklahoma City Bombing


Previous Post: Levon Helm the Rock Legend Dies at 71
Next Post: JAMB Change of Course/Institution Closing Date
About The Author